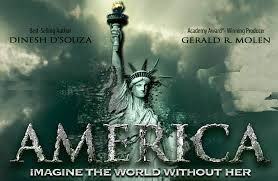 Dinesh D’Souza stormed onto the controversial scene in 2012 with his documentary expose on President Obama, that did not flatter the President. I have not seen that film nor read the book on which it is based but I understand that it was a searing critique on Mr. Obama. It went on to become the second highest grossing documentary of all time trailing Michael Moore’s equally destructive critique of George Bush in “Fahrenheit 9/11”.

I did however see his latest on-screen adaptation of one of his books. This one was; “America, Imagine a World Without Her”. I perused through the assorted reviews both professional and viewer on Metacritic and a couple of major US papers. Not surprisingly, the national movie review press is harsh on the film and the viewer response is moderately favorable.

This kind of lopsided negative sentiment from the press contrasting against moderate to favorable viewer reviews adds to the anecdotal evidence that drives the crazy fringe right into a foaming frenzy. I did my own review of the reviews and took a look at 47 viewer reviews on Metacritic. I dismissed 12 that were clearly written by fanatics on the right-wing and 17 that were clearly written by America hating liberal wackos. Mind you I did not read verbatim all 47 reviews but I was able to quickly eliminate ridiculously subjective pieces. That left 18 moderately to genuinely objective reviews with an average score 7.7 of 10. Only one of the “objective pieces came from a professional critic and that was LA Times’ Martin Tsai who was generally mixed leaning low (40 of 100).

This film was actually a well put together documentary. Dinesh makes no effort to hide his personal position in the very opening narrative with his own softly spoken words, “I Love America”. Over all, this film had a modest budget and did a great job presenting a quality experience with better than expected production value. The movie opens up with a well done reenactment of the Revolutionary war but with the twist that General Washington is killed by a sniper’s bullet. This led me and probably most of the professional movie critics to believe the film would then proceed to show us a world without America. After all, the subtitle is, “Imagine a World without Her”. It is here that the movie makes perhaps its biggest mistake. The narrative quickly turns to a more standard fare documentary. It teases us into thinking it will be something different and unique and then becomes something fairly routine instead. That is a bit of a letdown.

All that said, it is still a well done movie. Dinesh spends the first half of the film with “indictments against America”. Here he interviews a variety of people, some well-known, others not. These are people who have a negative view on America. They present the “ugly” side of the USA. Dinesh is very respectful during his short interviews with each of these people. He is never combative, and listens carefully to their point of view. He really doesn’t even rebut them much and when he does it is very softly and suggestive, rather than an assault. A nice contrast to the Michael Moore beat down approach.

The second half begins with a look at the “indictments” Mr. D’Souza then proceeds to show historical evidence that both supports and refutes the idea that America is an ill-gotten nation. Make no mistake as we move into this portion of the film we see Dinesh leaning right politically. It is a subtle lean however. He is not unabashedly in our face. Many will challenge his findings, but if you watch the film it does one thing very well that separates it favorably from Mr. Moore’s films. Dinesh D’Souza shows respect for the opposing viewpoint. He is very hard on the President of the United States but nowhere near as disrespectful as Michael Moore is to his political opponents. He also has some intersting but not necessarily accurate views on Hilary Clinton. Dinesh has what Moore never will. Class.

Towards the very end he sews a heavy American patriotism theme into the film. And he closes with his own troubles with the law after the 2012 election.

I really think that this film does a great job of presenting two sides of core idealism and opens it up for genuine debate and discussion. Liberals that are not radicalized should watch this film. It won’t change their minds, but it might open them up a little and maybe help them understand the moderate conservative side of America. Conservatives should not blindly follow the right-wing media. Liberals should not blindly follow their leaders, either.

I have never had any respect at all for the crowd in our nation that demonizes America. It is one thing to have ideas that are different. Ideas about how the government should be run, how and which programs should be administered, gun laws, healthcare, etc. These are ideas and beliefs that liberals and conservatives will always debate. I have no issue with that and in fact welcome open debate on such things. But the idea that America is an evil country or bad, or should be brought down, etc. is just silly. America is far from perfect and her sins are great. But Dinesh D’Souza makes an excellent and powerful presentation to the idea that America, more than any other nation ever assembled, has done more to right the wrongs of the past, and change the ways of the world mostly for the better. I think after some six years of an apologist’s Administration, a little flag waving pride is in order. Like all people we are flawed, as a nation and a culture, but we are still in my opinion the very best. I will fight against those that want to destroy us. Those that just want a fair debate on the issues, I welcome and respect them.

Whatever your political leanings, go see this movie. Open your mind, listen to the presentation, do a little post movie research, and then take a long hard look at your personal feelings about the United States. You can’t walk away from this without at least realizing that America is still a great nation. Wounded perhaps with a few scuffs and scratches, but still great.