The Glowing Fist is Back!

Netflix released season two of Marvel’s The Iron Fist last week and I watched all ten episodes over the weekend. I am a bit mixed on this second season. The first season was the least favorite of the Netflix shows and I will say this second go with Danny Rand wielding the power of dragon is better than the first.

There is a lot working in this second season. Many stories are being told in a cavalcade of sub plots. The relationship between Ward and Joy is a major sub plot that is also a key element in the primary “team” of antagonists. I like the character development we see here, some of the deepest you will see in any 10 episode season.

My problem with Fist II is that the story line has a great deal of potential for amazing story telling yet the director chooses to play it out in a rather predictable fashion. It seems like they dropped a touchdown pass here. 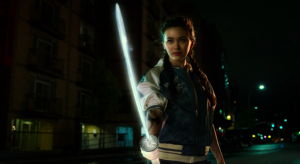 The last two episodes set us up for an interesting potential for new powered heroes with Misty Knight and Colleen Wing possibly becoming the Daughters of the Dragon. We also see an interesting development at the very end with Danny and Ward in Asia chasing leads on some mysterious secrets of K’un-L’un including revelations about Orson Randall. We are seeing a great setup for a fantastic third season or a maybe a whole new show.

Misty makes specific reference to Luke Cage and that she is not pleased with him in a foreshadowing scene with Colleen. The next season of Luke Cage is on deck for Netflix that could be really good. I am very optimistic about the future of Marvel on Netflix but this Iron Fist series remains the weakest of the very good bunch. There is so much to love in the characters in this show, Colleen, Ward, Joy, and our side villain/anti-hero Mary Walker all deliver excellent performances. The whole thing just fails to really come together. It seems like a setup show for other shows and that is unfortunate. What happened to the Iron Fist we saw making a cameo-ish appearances in the second season of Luke Cage. I am however, truly excited about the Danny Rand I saw at the very end of the last episode.

Netflix is still serving up great stuff and I like it 🙂