Daredevil Back to Complete the Trifecta 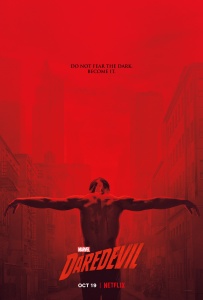 Netflix released Daredevil, season 3 last weekend and I managed to get all thirteen episodes done this week. It took me a while to really get into this season of Daredevil. It is a bit more introspective than the previous two seasons, but they came at us with a different approach. Our villain is right in front of us but it is unclear whether the villain is truly the villain until later in the season.

This Daredevil spends a whole episode bringing us the back story on Karen Page as well as a deep dive into sub-plot characters that are solidly tied to the overall story. The story telling here is a twisted web of uncertainly that is well tied together at the end of the story.

Although I was a bit underwhelmed for the first half, the second half was gripping and a fair bit of the edge of my seat was worn. This story gets tightly wound at the end and the story delivers a solid crescendo to finish the season.

I love the back story elements and the character development here. Short of any spoilers some of the breakaway in season 2 is resolved in season 3. The season also ties the defenders ending and wraps up some of the loose ends about what happened at and after Midland Circle. We will also learn some telling secrets about Matt Murdock, his father, and mother along with the development of an amazing villain.

The end of the last episode also shows a bit of foreshadowing for a future villain in the next season of Daredevil or perhaps the second season of Defenders.

In summary, I liked season 3 but I don’t think I liked it as much as the first 2 seasons. There was much to like, but also maybe just a tad too much going on for a 13 episode season. Netflix continues to impress with their excellent production values, solid acting and top-tier directing. Bravo, again.

It is amazing to think about how in a short span of three-year Netflix has produced ten seasons of Marvel based shows with well over 100 hours of content. Here is my list of favorite top to bottom. They are all quality shows though.

Published author, Professional Realtor and Amateur Weather Observer
View all posts by rodsager →
This entry was posted in Hot off the press and tagged Kingpin, Marvel, Netflix. Bookmark the permalink.